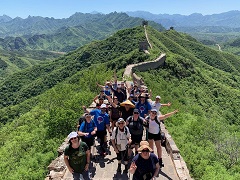 Congratulations to our team of 5 who completed this Trek and raised over $23,000 for MND NSW. Some great stories and incredible pics. Read more about Day 7 of this fantastic trip.

After a slightly slow start, we checked out of our hotel and began the bus ride to the next and final section off the wall. On the way, our guide Tony once again entertained us and informed us about Chinese culture and history. Today we learned about the Chinese zodiac and its importance in compatibility, especially when parents are doing the matchmaking. Apparently dragons are compatible mates with monkeys and rats, pigs are wise, and everyone wants to have a golden pig. Go figure!

Once we arrived at the Juyyonguan Great Wall, we were also greeted by a wall of heat rising up from the stone. The mercury had hit 30 degrees, and once again the first part of the day was straight up. Once we had made it up, we could look down into the river valley below, to see the series of fortresses and and defences that had been built to protect this important potential invasion point. We then sauntered along the wall, taking shelter from the sun occasionally in the ancient watchtowers, much as the Chinese soldiers must have done in days gone by.

The wall then dipped down back into the valley, and connected up to a fortress, which marked the end of the hiking part of our great all adventure! Everyone was footsore and exhausted, and many were carrying minor injuries or niggles, or struggling with stomach upset, but we had done it - 5 days hiking along the great wall!

We celebrated Western-style in the way back, by stopping off at some fast food places. Fans of McDonald's and KFC were well catered for, and these prices better choices than Subway, which required a mini-hike of 30min or so. This mini (mis)adventure ended in satisfaction though, and also a fun tuk tuk ride back to meet the bus.

After another bus transfer, we arrived back at the Chongwenmen Hotel for some very necessary showers. Some of the group rested up, while others went out in search of bargains at the Silk Market, all as a thunderstorm hit Beijing. The story goes that as the lightning danced over the buildings of Beijing, some fierce negotiating was happening in at least one of those buildings, and shopkeepers were left pulling their hair out, while some intrepid adventurers walked away with bargains.

After the markets, a few group members headed out to the San Li Tun entertainment district, where restaurant tables can be found that come complete with karaoke singers, or even like dancers!