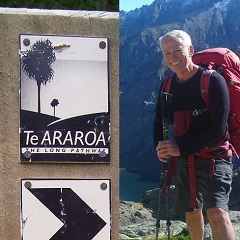 Congratulations to Gary White on a fantastic achievement trekking the Te Araroa long trail in New Zealand and raising $11,830 for MND. Read more for Gary's story about taking on this trek.

"I have always promised myself to do a really long trek when I retire, the time is here so from the 7th December I will start trekking the Te Araroa long trail in New Zealand commencing at Cape Reinga at the top of the north island and then south bound (commonly known as SOBO).

All being well after 5 months and 3000 kms and hopefully my soon to be 66 year old body will arrive at the bottom of the south island at The Bluff.

In doing this trek I hope to raise S10,000 for Motor Neurone Disease as I lost one of mates that I left England with 38 years ago. Chris Sorrell was diagnosed with this awful disease in his early 50's and put on a brave front until he lost the battle 18 months later. I will be walking with Chris in spirit as he too was a bushwalker as well as being creative, artistic, intelligent and a fun guy to have around."