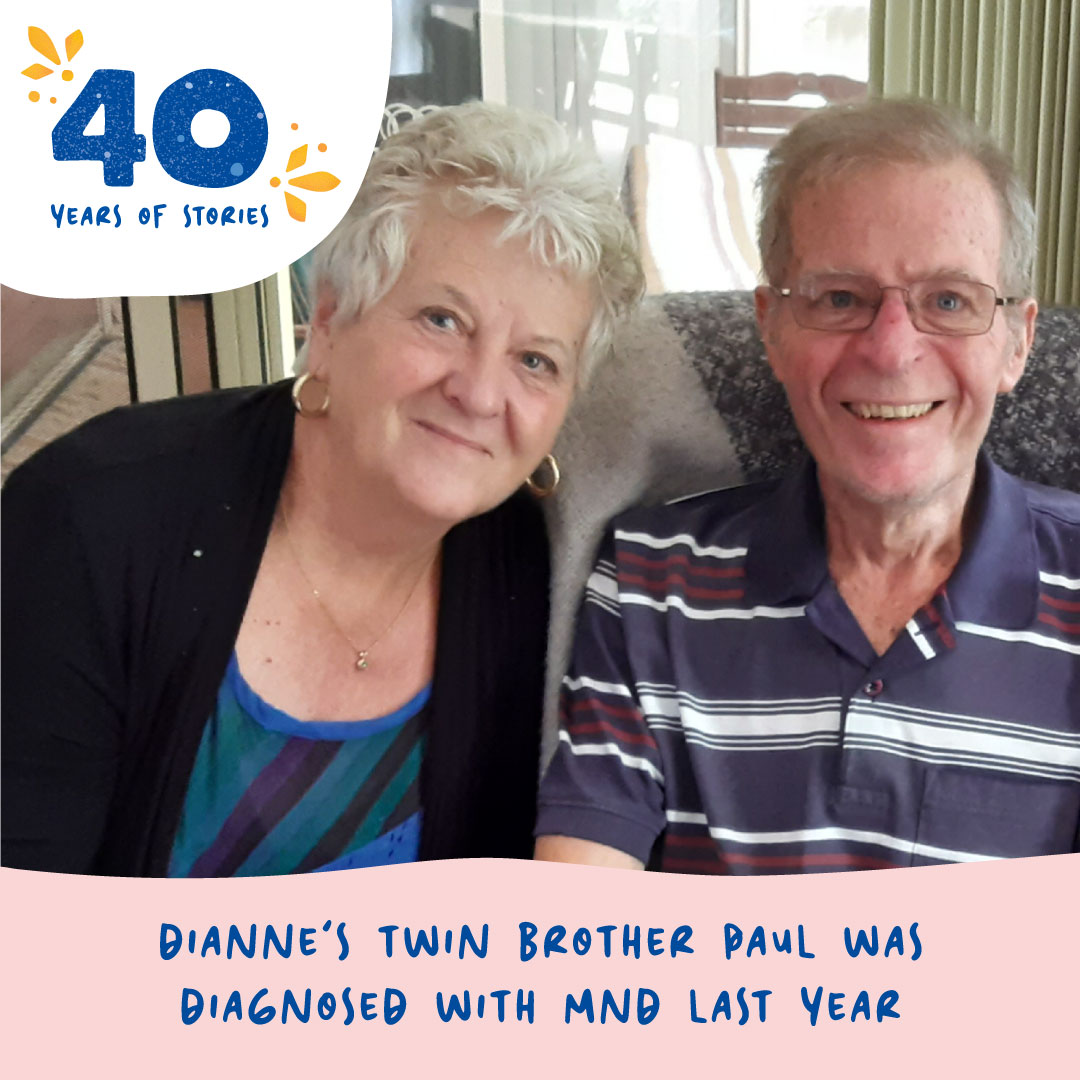 To mark 40 years of MND New South Wales this year, we are highlighting 40 years of stories from our members, staff, volunteers and experts.

In April 2020, the global pandemic had just hit and in the middle of a global lockdown, Dianne’s twin brother Paul was diagnosed with MND. The whole family was devastated.

In the beginning, Paul’s MND symptoms were quite varied.

The first thing was Paul’s “floppy foot”. He’d had it for a little while, but it went undiagnosed.

Then there was Pauls’ huge weight loss – he lost over 20kgs in about 7 weeks. It was clear that something was very wrong.

But it was Paul’s severe back pain that landed him at the doctors, as it was the symptom giving him the most pain.

“Paul had an MRI and then the doctor noticed his foot and said, "I think we'll do some more tests, Paul." With that it was only two days and he got the diagnosis that he had MND.” – Dianne, Paul’s twin sister.

From the day Dianne heard about Paul’s diagnosis, she did as much as she could to support him. She even attended an MND support group meeting with Paul, where she witnessed him sharing his wisdom and encouragement with others who were struggling.

“It was very emotional, as you can imagine. Paul was just amazing in his encouragement, in what he suggested or that he had done, and how it could help them. One of the members from the MND team there said, "Paul, I wished we'd videoed that because there was so much wisdom in it."

He said he'd come to the point where he had accepted that he had MND. There was nothing he could do about it, he couldn't change it, so he had to do the best he could with what he had, and he did. I was so proud of him.”

Dianne knows that it takes a very special person to be able to come to terms with a diagnosis themselves, then go on to help and support others going through the same thing. It’s no surprise the two of them were very close and shared an incredible bond.

One of the ways that Dianne has been able to process Paul’s MND diagnosis is through her artwork. She is an incredibly talented artist and she drew a portrait of Paul, from one of her favourite photos of them together, as something she could always cherish.

A few weeks ago, Dianne was on holidays with her family when she received a phone call out of the blue. It was about Paul. He had taken a bad fall at home and hit his head.
Sadly, there wasn’t anything that anyone could do for him and he passed away.

Dianne and her family are still processing their grief and coming to terms with what has happened. It was incredibly difficult for all of them to watch Paul’s condition deteriorate over such a short amount of time and to lose him so soon has been devastating.

That’s why Dianne is passionate about supporting MND NSW and she has a special message for everyone: “It’s such an insidious disease and for anybody suffering, it's the worst. It's a disease where people need the help. For Paul, it was weight loss and breathing and that was very distressing to see him gasping for breath...it's so distressing for the people watching on as well. MND NSW is a very worthwhile cause and they desperately need money to be able to give people that are suffering from MND the dignity and comfort of having help available.”

Dianne is continuing to support MND NSW through sales of a children’s book she created and Paul helped her name, called “What Do Cows Do?”. The book is available here, and proceeds go towards supporting MND NSW support services and programs.

Over the past 40 years we have been there for people facing an MND diagnosis, like Paul. Thank you for supporting us, and for being there for so many people when they need it most. With your help, we are continuing to make an incredible difference to people living with Motor Neurone Disease.